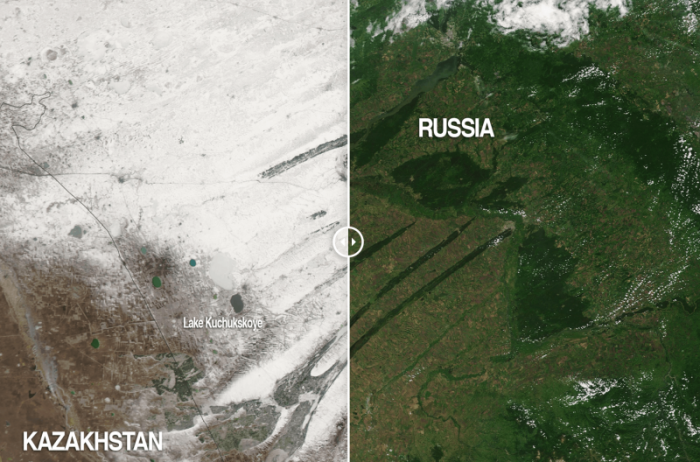 The series of photos released by NASA has been dubbed the “Images of Change”. The photos are images taken from space to highlight how changes to the earth have been influenced by a combination of fires, flooding, urbanisation and climate change.

These images include shrinking glaciers in New Zealand, melting ice in Canada, travel reduction in Wuhan Province, China as a result of coronavirus and snow in the Sahara Desert.

The series of pictures consist of over 500 images including before and after pictures which were taken anything from weeks to decades apart. The collection aims to show the reality of climate change on the planet.

For one, images of the Arctic Sea ice were captured back in 1984 and in 2020, with the latest pictures showing the noticeable change in the extent of the frozen region. The pictures clearly showed just how much ice had melted over the past 26 years.

A set of pictures also showed the Ok Glacier in Iceland had completely melted away, the results of a monsoon flooding in Pakistan and wildfires scorching Argentina. Half of the pictures taken were before a major event happening, with some pictures having been taken almost 4 decades before. The other half of the pictures show the same location after an incident.

Researchers at the NSIDC or National Snow and Ice Data Centre stated that 2020 recorded the second-lowest Arctic sea ice extent in over 42 years of satellite records.

‘The ice is shrinking in the summer, but it’s also getting thinner. You’re losing extent, and you’re losing the thick ice as well. It’s a double whammy,’ said Director of the NSIDC Mark Serreze, when figures were released in September 2020.

2012 saw the record low for Arctic sea ice, which was the lowest since the satellite records began in 1979. 2013 did see a higher minimum, however, that continued the extended downward trend of around 12% sea ice loss per decade since the late 1970s.

Whilst sea ice has been shrinking in the Arctic, the images NASA recorded showed signs of rare snowfall right at the edge of the Sahara Desert back in December 2016.

The space agency also captured images of human events, recording the dramatic reduction in traffic in Wuhan earlier in the year, right when the coronavirus pandemic was making waves.

These images have been shared on the NASA website as an interactive gallery, where site visitors can compare them by sliding across or side by side. The images are from various locations scattered around the globe and from various points in time, with the pictures split into varying categories covering human impact, cities, ice and water.

“Some of these effects are related to climate change, some are not,’ according to NASA, adding some show the impact of humanity itself on the planet we call home.

‘Some document the effects of urbanization, or the ravage of natural hazards such as fires and floods. All show our planet in a state of flux.”

The full NASA Images of Change interactive gallery is on the NASA website.

As reported by Daily Mail UK