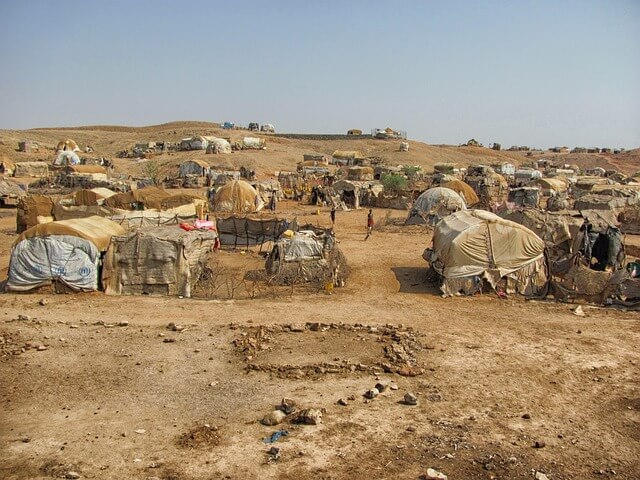 A new report states that certain nations that are more vulnerable to ecological threats than others and that over a billion people are at risk of being displaced within 30 years as a result of a combination of rapid population growth and the climate crisis. These factors are bound to fuel an increase in migration which will have huge consequences for both developed and developing nations.

The IEP, Institute for Economics and Peace, which is a think tank that publishes yearly global peace and terrorism indexes, reports that 1.2 billion people lived in 31 countries that were not resilient enough to withstand ecological threats.

19 of those countries seem to be facing the highest number of threats, which include food and water shortages, and increased natural disaster exposure. Those countries also happen to be amongst the globe’s 40 least peaceful countries, according to the IEP’s inaugural threat register.

Uganda, Burkina Faso, Angola and Nigeria are among the countries not only most at risk from ecological threats but are also predicted to see massive population growth, which could further fuel mass displacements.

The report stated that this is bound displacement would have far-reaching political and social implications, not only in the developing world but also in the developed world. This is down to the fact that mass displacement would cause an increase in refugee flows to the most developed of nations, according to the institute’s founder, Steve Killelea.

Ecological threats can pose serious challenges to peace worldwide. The next 30 years could see reduced access to water and food which will undoubtedly increase if there is no urgent coordinated global action. The world could see an increase in conflict, riots, and civil unrest if action is not taken.

The study in question utilised data from the United Nations, among others, to assess 157 nations’ exposure to 8 ecological threats. It then assessed the nations’ capacity to resist them. It discovered that 141 countries would face at least 1 ecological threat in the next 30 years, with North Africa, the Middle East, South Asia, and sub-Saharan Africa regions facing the largest number of ecological threats.

Certain countries such as China and India are threatened mostly by water scarcity, while others like Mozambique, Madagascar, Kenya, Iran and Pakistan face a mix of threats and are increasingly growing incapable of dealing with them.

The report also stated that a dearth of resilience could cause food insecurity to worsen, thereby causing mass displacement and civil unrest to increase.

Pakistan has been judged to be the nation with the largest number of people at risk of mass migration, with Iran and Ethiopia following closely behind. The latter two nations are even more prone to climate change, as even small natural disasters and ecological threats could cause the population to be displaced.

More developed and wealthier regions in North America and Europe face fewer ecological threats and they are better prepared to cope, however, the majority of them are not immune from wider impacts. Only 16 countries, including Ireland, Iceland, Norway and Sweden faced no threats.

The report also stated that there was 60% less freshwater available than there was 50 years ago and the demand for food is estimated to rise by half over 30 years. Given that the climate crisis is bound to increase the frequency of natural disasters, the report estimates that stable nations might become vulnerable in 30 years.